Sulphur occurs in a gaseous form as hydrogen sulphide and sulphur dioxide. The solid form of sulphur is sulphate, sulphides and organic sulphur. These forms are present in the soil and in the body of living organisms. Soil forms the main reservoir of sulphur. Lakes, continental shelf, marshes or waterlogged soils release hydrogen sulphide gas into the atmosphere. In the atmosphere it changes to sulphur dioxide. Combustion of fossil fuels and smelting release sulphur dioxide gas into the air. It comes back to the earth after getting dissolved in rainwater.

The cycling of sulphur

Plants get sulphur from the soil by the activity of sulphur bacteria which can use the elemental sulphur. Oxides of sulphur occur in the atmosphere because of the burning of fossil fuels and volcanic actions. Sulphur dioxide and hydrogen sulphide return to the soil as sulphates or sulphuric acid along with rain. Sulphur found in living organisms is essential for the synthesis of certain amino acids such as cystein, cystine and methionine, the peptide glutathione, enzyme cofactors like thiamine, biotine, thioctic acid and certain vitamins. With the decay of dead bodies of organisms and plants sulphur comes back to the soil.

The sulphur cycle integrates soil, air and water and one part of the sulphur forms sediments. Sulphur is incorporated in plants as-SH in proteins, passes to heterotrophs through the food chain and is released to the soil through dead tissues and faeces.

Role of microorganisms in sulphur cycle

In iron rich materials most of the H2S reacts with ferrous iron to produce FeS which is black and insoluble. Some chemo-autotrophic bacteria like Thiothrix, Thiobacillus etc., occurring in water containing H2S oxidise H2S to S (i.e., elemental Sulphur ) and then to SO4.

Green sulphur bacteria oxidise H2S to sulphur and purple bacteria oxidise sulphur to sulphate. Some other nutrients such as iron, copper, cadmium, cobalt, zinc, etc., become available on account of the reactions with sulphur. For example iron is precipitated as sulphide and becomes available to organisms. Leaching and precipitation of sulphur take out some sulphur from circulating pool and convert into part of reservoir pool. 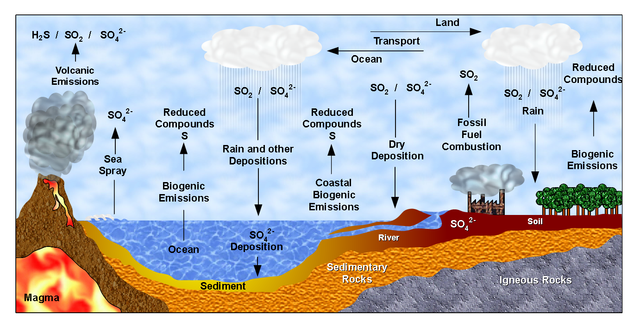 Phosphorus forms part of the sedimentary cycle and is very important being the energy career as ATP and part of the nucleic acids (i.e., DNA and RNA). It is also an inorganic component of phospholipids, bones and teeth. It takes part in metabolic reactions involved in release of energy from food and utilisation of this energy in various functions of the body.

It does not occur abundantly in natural ecosystems. Phosphatic rocks contain phosphorus which reaches the soil by a weathering process and then becomes available to the plants. The plants use phosphates (i.e., inorganic phosphate mainly orthophosphate ions) in metabolism and then pass on to heterotrophic organisms through the food chain. The decomposition of organic matter of plant and animal origin by microorganisms releases the phosphates in the soil and makes them available to plants once again.

Phosphorus has no gaseous phase. However, it may occur in air as tiny solid particles. The water soluble phosphate becomes available in aquatic ecosystem and is lost to the deep sediments of the ocean through run off, from where its recirculation to Earth is yet to be understood. However some amount of phosphorus returns to the earth in the form of bird excreta (i.e., guano), fish excreta and dead fish.

The cycling of phosphorus

Phosphate present in the soil may occur in insoluble form. The chemicals which the microorganisms and plant roots secrete, dissolve it to usable forms. The plants absorb it and then change it to organic form.  The soil from lake or ocean bed and guano (i.e., the excreta of marine birds) are also good source of phosphorus. From plants phosphorus travels to animals along with the food chain. The decomposers then decompose the dead bodies of organisms releasing phosphorus in the process. It then becomes available for reutilization by plants.

Inside soil some phosphorus is lost through leaching. Similarly a sufficient amount of phosphorus combines with calcium iron or aluminium and becomes insoluble. It settles down at the bottom of the lake or ocean as sediment. Bones and teeth may also remain undegraded. Such phosphorus becomes part of lithosphere. It releases after a very long interval when the rocks containing them expose to weathering agencies.

In recent years the excessive use of phosphate fertilizers to increase primary productivity and the use of detergents in a households and elsewhere has created pollution problems and the loss of phosphorus to oceans and other freshwater bodies. This is also one of the cause of eutrophication of freshwater bodies. 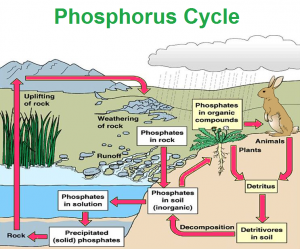