The meiosis occuring during the formation of gametes would distribute one set of autosome and only one of the two sex chromosome to each one of the gametes. Thus the male forms two types of gametes: A+X and/or 2A+Y

The males produce two different types of gametes and hence are termed as heterogametic. The the female would, however, produce only one type of gametes i.e., A+X. Hence, females are known as homogametic.

The sex of the offsprings can now be determined using the information available. The male with chromosome complement 44+XY would produce two types of gametes 22+X and another with 22+Y. The female would , however, produce only one type of gametes i.e.22+X. The fertilization between these gametes is at random i.e., by chance and, hence, any one of the two types of male gametes can fuse with female gamete. Thus, there is the probability that sons and daughters would be born in equal proportion i.e., 1:1. It is therefore, evident that the sex of the human child is determined by the male gamets or sperm of the male or father.

The sex is established soon after fertilization. Since the two types of male gametes containing X and Y chromosomes are produced in equal numbers (1:1) the chance of offspring being male or female is always 50%. 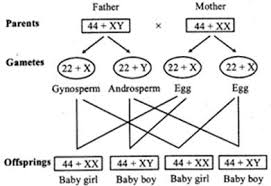 It is now established that Y sex chromosome carries a gene termed as sry (sex determining region). It carries testis determining factor (TDF). This is perhaps the smallest gene with only 14 base pairs. TDF is necessary for the development of male sex. When it  is absent, the organism develops female sex. Thus, Y sex chromosome is responsible for maleness.  Though Y chromosome determines maleness in humans and other mammals but not in Drosophila.

C.B. Bridges (1925) while studying Drosophila, found that certain female flies having 2X chromosomes were intersex. He discovered that such flies carry an additional set of autosomes. On this basis he reached the conclusion that autosomes play a great role in sex determination. He accidentally obtained a triploid (3A+3X) Drosophila with three sets of chromosomes and it was a normal female fly.

Intersexes are sterile individuals having characters of males as well as females and the supersexes are also sterile which show slight differences from males or females. It also implies that female tendency genes are present on X chromosomes and male tendency genes occur on the autosomes.  The ratio of genes on X chromosomes and autosomes determines sex of the offspring , hence the name genic balance theory.

Hormones affect the development of sex organs, in many animals. In cows and buffaloes twins develop frequently. When the twins are of same sex they develop normally. If however, they are of opposite sex, the female partner does not develop normally as it becomes sterile. Although it develops external genital organs of female, at the same time sterile gonads of male also develop internally. Such an individual is termed as free-martin after the name of the scientist who first studied it.

Later on F.R. Lillie gave a very strong evidence of the hormone theory of sex differentiation. According to him at the time of development of twins there is a fusion of blood vessels of the two embryos within the placenta or foetal membrane. It results in the mixing of the blood of the twins. The gonads of the male differentiate before those of female. Male gonads start secreting male sex hormone which through the common blood vessels reach the other (female) embryo. Male hormone influences the development of female embryo which starts developing maleness and becomes sterile. Such an intersex is termed as free-martin.

In some lower animals, males and females have similar genotypes. In them, the environment provides the stimulus to bring male or female genes into expression.

F.Baltzer and his coworkers described such mode of sex determination in Bonellia viridis, a marine echiuroid worm. This species shows a well-defined sexual dimorphism. The males are rudimentary and microscopic and live permanently in the uterus of the well developed half an inch long female.

Larvae which develop from the eggs are sexually undifferentiated. Those larvae, which come in contact with a female, settle on its proboscis and develop into males, while those which settle on some substratum develop into females. Thus, in this case the environment in which the larvae develop determines the sex.  Proboscis of the female contains a sort of hormone which determines sexual traits of the larvae.

Addition of extracts of the proboscis  to water containing sexually undifferentiated larvae, encourages the production of males. The fact that the larvae at the proboscis of the female develop into males is of advantage to the females. The males, which develop there, later become available for mating.

Murray Barr (1949), a geneticist noticed a small body in the nucleus of the nerve cells of female cats which stained heavily with nuclear stains. Further investigations showed that not only nerve cells but many other cells from female cats only, had these bodies, now termed as sex chromatin or Barr bodies.

Barr bodies also occur in females of many mammals including human. In women the Barr body lies against nuclear membrane like a round disc in the neutrophil blood cells, skin cells, nerve cells, cells of mucous membranes, cells of lining in vagina and urethra. They are absent in man.