Following are some of the examples of inheritance of sex linked diseases:

Haemophilia is an X-linked recessive disorder. Persons suffering from this disease are unable to properly form blood clots. Any small cut or internal hemorrhaging after even a small bruise is fatal. This is therefore, also termed as ‘bleeders disease’. The concerned gene is termed as antihaemophilic globulin (AHG) gene. It suppresses the synthesis of factor VIII, IX or XI. The gene does not have an allele on Y chromosome.

When the father is haemophiliac and not the mother then, none of the sons would be haemophiliac but all the daughters would be carriers with X chromosome carrying defective recessive gene.

Haemophilia figured predominantly in the history of European royalty. Queen Victoria passed the mutation to her son Leopold and through daughters to the royal families of Spain and Russia. For this reason it was popularly termed as ‘Royal Disease’. 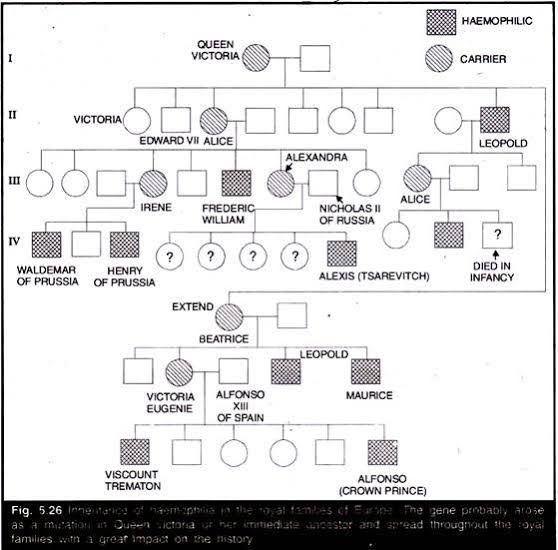 Horner 1876 discovered, for the first time, that some people cannot distinguish between red and green colours. This condition was present only in some families including well known scientists  Dalton (1798). This is due to its sex linked recessive gene located on X chromosome. The gene helps in the formation of colour sensitive cells termed as cones in the retina. These cells are necessary for the distinction of red and green colour.

A pedigree analysis shows that only males are affected by this disease. This indicates that the gene is inherited in different manner when it is connected with sex.

Colour Blindness in the Offspring of Different Parents

The following four cases are worth considering.