Question 1 : Complete the story using your imagination in 150-200 words. Also give it a suitable title.

‘It was the festival of spring. One little boy ran as his father called out to him. He had lagged behind as he was fascinated by the toys in the shop. He hurried towards his parents, his feet obedient to the call, but suddenly………………

It was the festival of spring. One little boy ran as his father called out to him. He had lagged behind as he was fascinated by the toys in the shop. He hurried towards his parents, his feet obedient to the call, but suddenly the eyes of the boy got stuck at a toy shop. The shop had his favourite toy, a train. He was mesmerised by it and kept looking at the toy because his earlier toy train had broken when some visitor to his home dropped the toy to the floor from a height.

He kept on staring till the shopkeeper asked him if he wanted to buy the toy train. The boy nodded. The shopkeeper asked him to call his parents to the shop. With horror, the boy realised that his parents were not with him and he was lost. He started crying very loudly. The shopkeeper tried to console him but it was of no use. He also tried to give him the train, but the boy only wanted his parents. Hearing his cries, people started gathering near the shop. Then a couple came rushing towards the shop. As soon as they saw their child, their happiness knew no bounds. They also bought the train for their child and asked him to be cautious from then onwards.

Question 2 : Write a short story in 150-200 words  based on the sequence of pictures and the beginning given below

‘Raman was a 14 year old boy who lived with his family in a Kerala village. One day during the monsoon season…………….’ 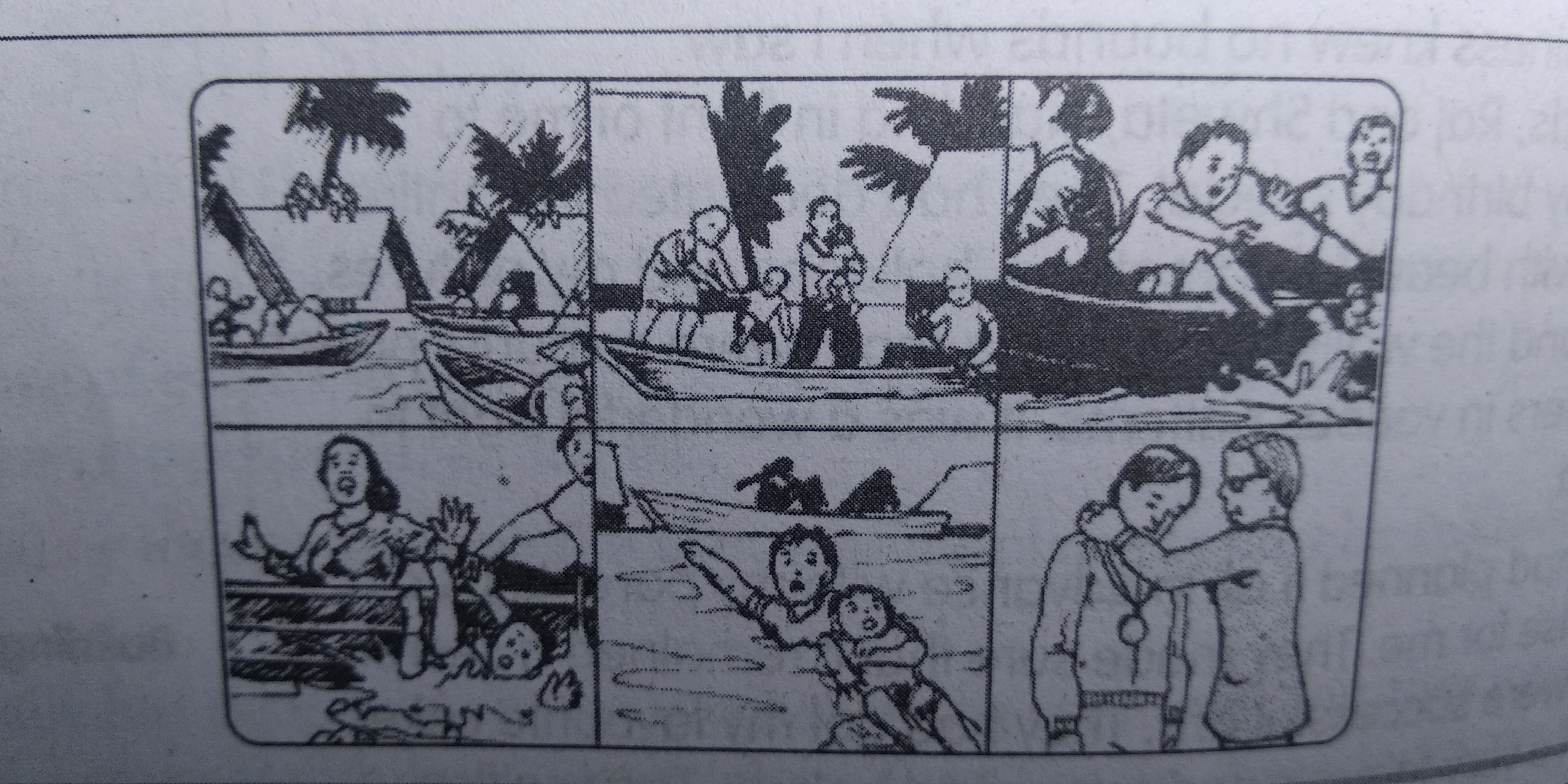 Raman was a 14 year old boy who lived with his family in a Kerala village. One day during the monsoon season there was heavy rain and the village was flooded. The government started evacuating the villagers from their homes, as the flood waters had entered them. In the boat with them were three other families with their pets. One family had a small puppy dog which was very playful. The puppy sat at the edge of the boat and was enjoying the ride when the boat titled dangerously. The puppy fell into the water.

There was an outcry from the family’s 6 year old son who loved the puppy dearly. He tried to catch the puppy himself, but overbalanced and fell into the flood water. The boy’s parents panicked and shouted, but could not do anything as they did not know swimming.

But Raman was a good swimmer. He immediately jumped into the swirling water and swam quickly towards the 6 year old boy. Raman held his head above water while swimming back to the boat. After Raman had handed over the boy to his parents in the boat, he again swam back to save the puppy. Luckily the puppy was still alive, although it has swallowed some water. Taking the puppy back to the boat was more difficult, but Raman managed it. The little boy went overjoyed to see the puppy alive and hugged it excitedly.

Later on, Raman was awarded a medal for bravery against all odds by the District Magistrate at a formal ceremony at the district headquarters. He was also recommended for the Sanjay Chopra Award given by the President of India every year to such children.

Question 3 : Complete the story in 150-200 words using the outline given below. Also give it a suitable title.

It was a dark and lonely night. I was returning from a relative’s place and had missed the last bus going towards my village. Now I had to walk through the jungle. I was hesitant, but the thought of reaching home on time persuaded me. There was something odd about the jungle in the night. It was very quiet and the silence made me shiver. Suddenly I realised that I was lost. I was gripped with panic. I cried for help but there was no response. I was terrified to hear the sounds of owls and bats. It was scary and I had lost all hopes of survival. Suddenly, I heard the sound of footsteps. I suspected that I was not alone. I followed the sound of the footsteps, it was like light at the end of the tunnel. After ten minutes, I reached near a lonely house. I hid behind the trees to see whether it would be safe to go near the house. Finally, I decided to take shelter in the lonely house, but to my shock it was full of dancing skeletons. I fainted with fear. When I opened my eyes, to my relief, I found myself sleeping in my lovely bed. What a nightmare it was!

Question 4 : Develop a story in 150-200 words using the following beginning. Also give it a suitable title.

Pride Comes Before a Fall

Once upon a time, there was a peacock that was enjoying the pleasant weather in a forest. Flying happily, he reached across the river. Suddenly, a God-like lady emerged from the river and asked the peacock to ask for a boon.

The peacock was surprised, as he thought of the purpose for this blessing. Yet, the peacock said that he wanted to be an eagle. However, the lady wanted him to get converted into a human being so that he could explain to humans the plight of the birds and also teach them a good lesson. But the peacock looked up at the sky and said he wanted to fly high over the clouds and his heavy wings stopped him from doing so. The lady granted his wish half-heartedly. The peacock got transformed into an eagle. He looked at himself and excitedly made a loud cry like  proud eagle. He took his first flight and went straight up over the clouds. As soon as he reached a good height, he was hit by a bullet and came crashing down to the ground, eventually dying an unfortunate death. The lady emerged again, restored life to him and converted him into a peacock. She further asked him to be satisfied in life.

The peacock learned his lesson and was relieved to be back to his former self.