However, in some cases, the ovary grows into a fruit even in the absence of fertilization of the ovule.  Such fruits are usually seedless or bear undeveloped seeds and are called parthenocarpic fruits, example banana, orange, apple, grape etc.

A fruit is normally formed by the growth of the ovary and is known as the true fruit.  But in some cases, the thalamus or even the calyx may grow and form the major part of the fruit and such a fruit is called false fruit, example, Anacardium.

Fruits may be broadly classified into three groups – simple, aggregate, and multiple or composite or compound fruits.  Some of the common types under each group are discussed below:

When only one fruit is developed from a single flower having a monocarpellary or polycarpellary and syncarpous ovary, with or without accessory parts, it is said to be simple fruit.  Simple fruit may be either dry or fleshy.

These types of fruits have a thin, hard, dry pericarp and are again classified into dehiscent or capsular, indehiscent or achenial and splitting or schizocarpic fruits.

These are dry, many-seeded and dehiscent fruits.  Capsular fruits may be of the following types:

This group includes mostly single-seeded fruits which do not open at maturity.  They are of the following types:

These are dry many-seeded indehiscent fruit developed from either superior or inferior syncarpous ovary.  On maturity, these fruits split up into individual indehiscent one-seeded parts called mericarps.  In some cases, however, the one-seeded parts are dehiscent in nature and are called cocci.  Schizocarpic fruits of the following types. 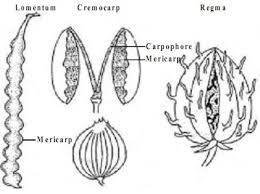