Multiple Choice Questions and Answers (MCQs) on Theory of Machines

01. The motion between a pair which takes place in __________ is known as incompletely constrained motion.

02. A torsional system with discs of moment of inertia I₁ and I₂ as shown in the below figure, is gear driven such that the ratio of speed of shaft B to shaft A is ‘G’. Neglecting the inertia of gears, the equivalent inertia of disc on shaft B at the speed of shaft A is equal to 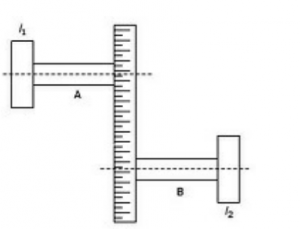 03. The frictional torque transmitted in a flat pivot bearing, considering uniform pressure, is (where μ = Coefficient of friction, W = Load over the bearing, and R = Radius of bearing surface)

04. A typewriter mechanism has 7 numbers of binary joints, six links and none of higher pairs. The mechanism is

05. The magnitude of velocities of the points on a rigid link is

08. The velocity of a flat-faced follower when it has contact with the flank of a circular arc cam, is given by

09. Two systems shall be dynamically equivalent when

10. The motion of a shaft in a circular hole is an example of

17. The steering of a ship means

18. The height of a Watt’s governor is

19. In a differential band brake as shown in the below figure, if the length OB is greater than OA, then the force P at C should act in the downward direction.

20. A slider crank chain consists of following numbers of turning and sliding pairs

21. Kinematic pairs are those which have

23. Longitudinal vibrations are said to occur when the particles of a body moves

24. When brakes are applied to all the four wheels of a moving car, the distance travelled by the car before it is brought to rest, will be