Translation is a process which involves decoding messenger RNA (mRNA) to produce a specific amino acid chain or polypeptide chain. The synthesis of proteins or polypeptides occurs in the cytoplasm along the ribosomes.

Protein synthesis occurs over the ribosomes. Ribosomes are therefore, also termed as protein factories. They are minute spherical nucleoprotein entities and function as sites for protein or polypeptide synthesis. Ribosomes occur in the cytoplasm and organelles such as mitochondria and plastids. Ribosome has two unequal parts, small and large.

The larger subunit of ribosome is in the shape of a dome . It has a groove for pushing out the newly formed polypeptide and protecting it from cellular enzymes. The smaller subunit  fits over the larger one like a cap, but leaves a tunnel for mRNA. The two subunits come together only at the time of protein formation. The phenomenon is termed as association. Soon after the completion of protein synthesis the subunits separate. The phenomenon is termed as dissociation. For this an initiation factor  attaches to smaller subunit.

Following are the different parts of a ribosome concerned with protein synthesis :

It is messenger RNA which brings coded information from DNA and takes part in its translation by bringing amino acids in a particular sequence during the synthesis of polypeptide. However, the codons of mRNA are not recognised by amino acids but by anticodons of the adaptor molecules. Translation occurs over the ribosomes. The same mRNA may be used again and again.

They are transfer or soluble RNAs which pick up particular amino acids and take the same to mRNA over particular codons corresponding to their anticodons. A tRNA can pick up only specific amino acids though an amino acid can be specified by 2-6 tRNAs. Each tRNA has an area for coming in contact with ribosome and the enzyme aminoacyl tRNA synthetase.

It is the enzyme that helps in combining amino acid to its particular tRNA. The enzyme is specific for each amino acid. It is also termed as amino acid activating enzyme.

The major steps in the synthesis of a polypeptide chain

Following are the major steps in the synthesis of a polypeptide chain.

Attachment of mRNA to 30S ribosome:

Ribosomes occur in the cytoplasm. These occur in inactive state as separate units. The mRNA formed by a DNA strand in the nucleus binds to 30S ribosomal sub unit in the presence of F2 protein factor.

The amino acids occur in the cytoplasm. They are of 20 different kinds. These are present in an inactive state. Each of these 20 amino acids is activated by ATP in the presence of a specific activating enzymes termed as aminoacyl synthetase to form aminoacyl adenylate enzyme complex (i.e., aminoacyl AMP). It results in the release of pyrophosphate (or inorganic phosphates).

Since there are 20 different amino acids, at least, 20 aminoacyl synthase enzymes are present in the cell.

The aminoacyl-AMP- enzyme complex (i.e., aminoacyl adenylate enzyme complex) associates with 3’OH end of specific tRNA molecule. AMP undergoes now hydrolysis to form an ester bond between the specific tRNA and its amino acid molecule. The resultant tRNA is released from enzyme towards the site of protein synthesis.

There are at least 20 different types of tRNA for 20 different amino acids. The aminoacyl tRNA moves towards the site of protein synthesis, where mRNA is attached to the ribosomes.

Pairing of (N-formyl) methionyl- tRNAfmet with initiator codon and the association with small ribosomal subunit requires at least three proteins (IF-1, IF-2 and IF-3) termed as initiation factors and the hydrolysis of a molecule of GTP. Thus, a complex termed as initiation complex is formed between mRNA, formylated methionine tRNAfmet and the smaller ribosomal subunit.

After the placement of initiator codon, polypeptide chain will elongate with the addition of amino acids. Since  methionyl- tRNAfmet, occupies the peptidyl site, the next codon will now occupy aminoacyl site. This association requires GTP and two elongation factors (EF-Ts and EF-Tu).

The next step is the translocation which involves (1) movement of second tRNA from aminoacyl to site and dislodging empty tRNAfmet and (2) the movement of entire ribosome along mRNA, a distance equivalent to 3 nucleotides.

Since the aminoacyl site is now vacate, it allows the entry of a new codon. The process of peptide bond formation and translocation is now repeated. As the ribosome moves in 5′-to 3′ direction along the mRNA strand, 8 to 15 amino acids will be incorporated into the elongating polypeptide chain every second. 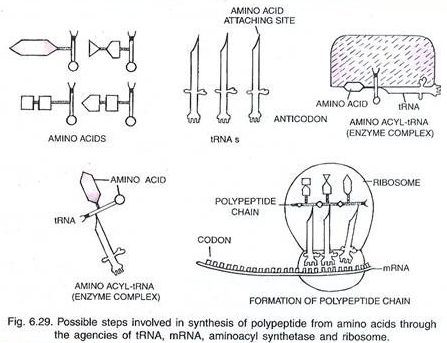