Transpiration is the process of loss of water in the form of vapours from the aerial portions of the  plant.  Less than 5% of total water absorbed by plant is used for the development and metabolic processes.  Remaining 95% of water is released into the atmosphere as water vapour.

The dry air of the atmosphere has a higher diffusion pressure deficit. The water vapours saturate the intercellular spaces of the transpiring organs. When the stomata are open, the water vapours are drawn from the substomatal cavities to the outside air .

Normally, there is always a difference in vapour pressure between the inside and outside atmosphere of leaves but stomata are not always open because of various reasons.  Hence, the rate of transpiration depends upon the number of stomata and the degree of stomatal opening.

Loss of water can take place from any exposed part of the plant as it is a physical process.  Transpiration is of three types, stomatal, cuticular and lenticular.

Stomata are minute pores on the epidermis of leaves. They form a connecting link between internal tissue and surrounding atmosphere.  Therefore, they are the main passage through which water vapour escapes.  Stomatal transpiration accounts for 80%-90% total water loss of the plant.

Cuticle is a wax-like layer of cutin that covers the epidermis of leaves and stems.  Cuticles present on the surface of the epidermis reduces the direct evaporation of water.  If the cuticle is thin, up to 20% of total transpiration may take place through it.

But as its thickness increases, the extent of water vapour loss is significantly reduced.  Cuticular transpiration accounts for about 10% of the total amount of transpiration from leaves under ordinary condition.

Lenticels are small openings in the cork of woody stem, twigs and fruits.  Water vapours are lost through these openings.  Lenticular transpiration is the loss of water through lenticels present on woody stem and fruit.  It accounts for 1% of total water loss of a plant.  However, in deciduous trees, which shed their leaves during autumn, lenticular transpiration can be significant.

Stomata are tiny pores or openings present in the epidermal surface of leaves and young stems.  A typical stomata usually consists of two kidney-shaped or bean-shaped guard cells, which differs from other epidermal cells, mainly in two respects. 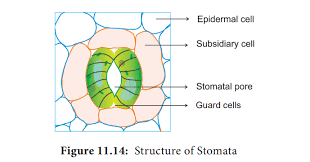 The guard cells are also characterised by accumulation of starch during night and decrease during day.  Guard cells are usually smaller in size as compared to other epidermal cells.  Therefore, they are rapidly affected by small change in turgor.  The opening and closing of stomata depends upon the turgidity of guard cells.  Modified epidermal cells, called subsidiary cells or accessory cells border the guard cells. 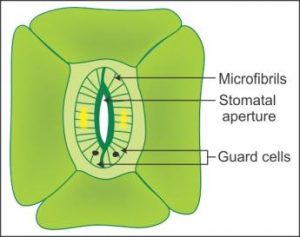 Types of stomata (according to their distribution)

Types of stomata (according to the daily movements)

Loftfield classified stomata into following four types on the basis of their daily movement: 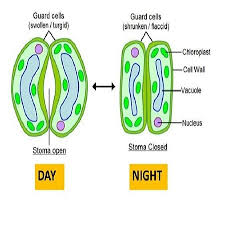 Fig: Stomatal transpiration ( Stomata in day and at night) 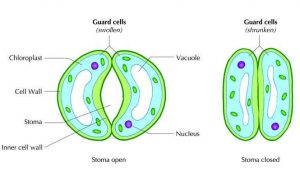 Type of stomata (depending on their association with subsidiary cells)