Oxidative phosphorylation is the synthesis of energy-rich ATP molecules with the help of energy liberated during oxidation of reduced coenzymes (NADH2 and FADH2), produced in respiration.  The enzyme required for this synthesis is called ATP synthase.  It is considered to be the 5th complex of electron transport chain.  ATP synthase is located in F1 or headpiece of F0– F1 or elementary particles.  The particles are present in the inner mitochondrial membrane.  ATP synthase becomes active in ATP formation only when there is a proton gradient having higher concentration of H+ or protons on the F0 side as compared to F1 side.  Increased proton concentration is produced in the outer chamber or outer surface of inner mitochondrial membrane by the pushing of protons with the help of energy liberated by passage of electrons from one carrier to another.  Transport of electrons from NADH2 over electron transport chain helps in pushing 3 pairs of proton to the outer chamber while 2 pairs of protons are sent outwardly during electron flow from FADH2 (as FADH2 donates its electron further down to the electron transport chain).

Higher proton concentration in the outer chamber causes the protons to pass inwardly into matrix or inner chamber through the inner membrane.  The inner membrane possesses special proton channels in the region of F0 (base) of the F0- F1 particles.  The flow of protons through the F0 channel induces F1 particle to function as ATP synthase.  The energy of proton gradient is used in attaching a phosphate radical to ATP by high-energy bond.  This produces ATP.  Oxidation of one molecule of NADH2 produces 3 ATP molecules while a similar oxidation of FADH2 forms 2 ATP molecules.

In aerobic respiration, complete oxidation of one glucose molecule produces 38 ATP molecules.  But the number of ATP molecules so produced may vary depending upon the mode of entry of NADH2 in mitochondria.   The two molecules of NADH2 formed in glycolysis cannot directly enter the membranes of mitochondria.  These enter into the mitochondria through a shuttle or indirect pathway.  Two such known shuttles area as follows:

The shuttle continuously transfers electron from cytoplasm to mitochondria and does not allow the accumulation of hydrogen molecules in the cytoplasm. 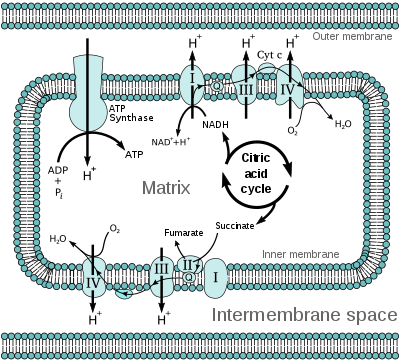 It is a process of release of energy in enzymatically controlled incomplete degradation of organic food without oxygen being used as oxidant.  Anaerobic respiration is exclusive mode of respiration in some parasitic worms and microorganism for example (bacteria, moulds).  Anaerobic respiration occurs in the roots of some waterlogged plants, muscles of animals, and as a supplementary mode of respiration in massive tissues. Fermentation is a kind of anaerobic respiration carried out primarily by fungi and bacteria Louis Pasteur (1822-1895) concluded that fermentation occurred only when living yeast cells were present.  However, Buchner (1897) found that living yeast cells were not necessary for fermentation.  He demonstrated that extract prepared by crushing yeast cells could ferment sugar.  This extract has been shown to contain an enzyme, zymase capable of fermenting hexose sugar.  Besides zymase, yeast cell also contains enzymes like sucrase and maltase, which can ferment sucrose and maltose respectively.  Direct fermentation of starch by yeast is not possible as it lacks amylase enzyme. Because of the enzyme zymase, fermentation is also called zymosis.

Commonly, fermentation is defined as the anaerobic breakdown of carbohydrates and other organic compounds into alcohols, organic acids, gases etc., with the help of microorganisms or their enzymes.  The mechanism of anaerobic respiration is similar to common pathway of aerobic respiration up to glycolysis.  Glycolysis breaks down glucose enzymatically in several steps to form two molecules of pyruvate.  Pyruvate is anaerobically broken down to yield various products depending upon the organism and the types of tissue.  The two common products are ethyl alcohol and lactic acid.

Acetaldehyde is reduced to ethyl alcohol or ethanol in the presence of enzyme alcohol dehydrogenase.  Hydrogen is obtained from NADH2 produced during oxidation of glyceraldehyde 3 phosphate to 1, 3 diphosphoglycerate in glycolysis. 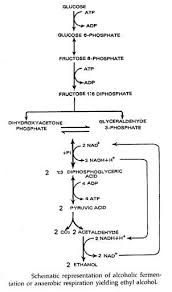