When there is only one prominent midrib, from which the lateral veins are developed, the venation is known as uicostate reticulate or pinnately reticulate.  Examples, mango, sunflower, guava.

When a number of prominent veins enter into the lamina from the petiole and spread out like the fingers of the palm, the venation is known multicostate reticulate or palmately reticulate venation.  Palmate venation is of two types: 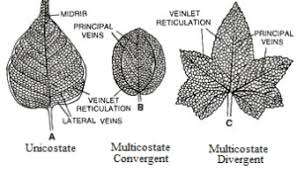 This type of venation is characteristic feature of the leaves of the monocotyledonous plants.  Here, the veins do not branch or form network but run parallel to one another.  Parallel venation is of two types.

In this type, there is a single main vein, from which lateral veins are developed.  The lateral veins run parallel to one another without branching or forming a network.  Examples, banana, turmeric, ginger etc.

In this type, several main veins arise in the main base of the lamina and run parallel to one another without branching.  Multicostate Parallel venation may be of two types.

a).  Divergent:  When the prominent main veins diverse from one another from the base of the lamina and proceed towards the margin, being more or less parallel to one another, it is called multicostate parallel and divergent type of venation as in Borassus.

b) Convergent: In this type, the main veins after arising from the base of the lamina run parallel to one another and then get curved at the margin region so that they finally meet towards the apex of the leaf.  Examples, rice, bamboo.

The mode of arrangement of leaves on the stem or branch is known as phyllotaxy.  By means of various types of arrangements the leaves avoid shading over one another and get themselves better exposed to sunlight, so that they can carry out the function of synthesis of food. Mainly there are two types of phyllotaxy – spiral and cyclic. 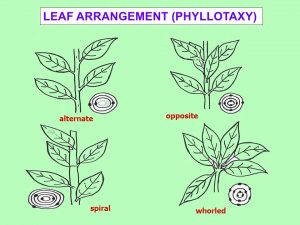 When one leaf is developed at each node, having alternate arrangement, it is called spiral phyllotaxy as in case of Cynodon, Hibiscus etc.  In such an arrangement, when an imaginary line is drawn passing through the base of successive leaves in order of their development, it forms a spiral around the stem.  This imaginary spiral line is known as genetic spiral.

When the genetic spiral makes one complete turn, it subtends an angle of 360 degree at the centre.  The angle which is formed between successive leaves is called angle of divergence.  The number of vertical rows of leaves is known as orthostichy.  Spiral phyllotaxy may be of the following types:

b) Tristichous: In this case, the fourth leaf remains vertically above the first leaf, so that the genetic spiral makes one complete turn and the number of orthostichies is 3.  The angular divergence will be 120 degree.  Tristichous phyllotaxy is seen in case of Cyperus.

C) Pentastichous: In this case, the sixth leaf remains vertically above the first leaf, so that the genetic spiral makes two complete turns between the first and sixth leaves and the number of orthostichies is 5.  The angular divergence will be 144 degree.  It is seen in case of Hibiscus.

d) Polystichous: When the number of orthostichies exceeds 5,the phyllotaxy is called polystichous.  They may be like 3/8, 5/13 etc.  3/8 phyllotaxy is seen in Thevetia and 5/13 in Plumeria

When two or more leaves are borne on the same node, the arrangement is known as cyclic phyllotaxy.  It may be of two types:  Opposite and whorled.