Water potential is the difference between free energy of water in a system and the free energy of pure water at atmospheric pressure and a defined temperature.  It is represented by Greek letter Psi (Ψ) and is usually measured in bars.

For a solution such as contents of cell, water potential is determined by three sets of internal factors like:

Matrix is the term used for the surface (such as soil particles, cell wall, protoplasm etc.) to which water molecules are adsorbed.  It is the component of water potential which is influenced by the presence of matrix.  It has got a negative value in case of plant cell and tissue.  The equation for water potential may be simplified as follows:

The relationships among the various potentials can be expressed as follows:

Since matric potentials are insignificant and can be ignored, the above relationships can be simplified as:

In a fully turgid cell, there would be no water movement.  For example, if a cell has solute potential of -10 bars and pressure potential of 10 bars, the water potential would be zero. 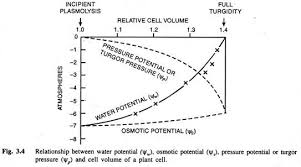 Role of turgor pressure in plants:

A typical plant cell has a semi-permeable membrane, a cell wall, a vacuole and an osmotically active solution called cell sap.  A plant cell functions as an osmotic apparatus or osmotic system.

The osmotically active cell sap has an osmotic potential.  It causes the osmotic entry of water which develops a turgor pressure or pressure potential. 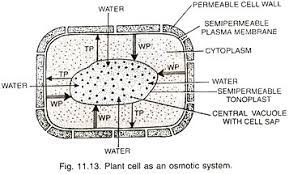 Osmotic relations of cells according to water potential:

In case of fully turgid cell:

There is no net movement of water between the cell and its environment.  The cell is in equilibrium with the water outside and so the water potential becomes zero.  Water potential is equal to osmotic potential + pressure potential.

In case of flaccid cell:

A plant cell kept in hypertonic solution loses water by exosmosis.  The volume of the central vacuole decreases.  As a result, the protoplast is reduced in size.  This decreases the turgor pressure or pressure potential and the turgor becomes zero.  A cell at zero turgor has an osmotic potential equal to its water potential.

In case of plasmolysed cell: