Cross pollination is the transfer of pollen grains from the anther of one flower to the stigma of a genetically different flower.  This process is also called allogamy or xenogamy.  It requires two flowers belonging to two different parents.  Cross pollination is performed with the help of an external agency.

Cross pollination involves external agent for the transfer of pollen grains of one flower to the stigma of another flower.  It involves two main groups of agents – biotic agents which include animals of different types such as insects, bird, bats, snails etc.  Pollination through the agency of animals is known as zoophily.  The second one is abiotic agent like wind and water.  Cross pollination is named after the agency that assists it.

Colour of the petals, irregular shape and large-sized corolla are the major features which attract insects.  Bees appear to prefer blue flowers and butterflies the red ones.

When the petals are not attractive and brightly coloured, other parts of the flower may become coloured and showy.  For example, in Mussaenda, one of the sepal becomes large and white or yellow in colour.

The bract in Bougainvillea becomes bright coloured.  In banana, the inflorescence is covered by attractively coloured spathe.

Scent is another adaptation developed by the flowers.  Night flying moths are attracted by the flowers producing strong scent during the night.  For example, Nyctanthes, Cestrum, rose etc.

Some of the flies are attracted by the foul odour emitted by the flowers.  For example, odour of Rafflesia attracts carrion flies.  The inflorescence of Amorphophallus produces stinking smell during the night which attracts small feeble flies.

Nectar is secreted by special glands, called nectaries.  The nectaries are concealed with corolla tube and spur.  The pollens adhere to the mouth parts, head, legs and body hairs of the insects, which come in search of nectar, thus helping in pollination.

Some flowers, for example, Orchis morio secretes edible saps.  Birds and insects visit such flower to collect the edible saps and in this process, get dusted with pollen grains.

Many flowers such as rose, Clematis, Magnolia etc., produce edible pollens.  Bees and other insects visit such flowers to collect pollens as food.

Some plants have special mechanisms for the visiting insects to help in pollination like irritability of anthers and stigmas to touch (e.g., Bignonia), versatile stamen (e.g., grasses), lever mechanism (e.g., Salvia) etc.

Salvia has a bilabiate corolla with two epipetalous stamens.  The two anther lobes of a stamen are widely separated by a long curved and lever-like connective.  These connectives swing freely on the filament.  The upper anther lobe is fertile while the lower is sterile.

Ornithophily: Pollination by birds is known as ornithophily.  Only a few types of birds are specialised for this.  They usually are small in size and long beaked.  Two common types of tropical pollinating birds are sunbirds and humming birds.  Humming birds perform pollination while hovering over the flowers.  Sunbirds alight over the shoots supporting flowers or occasionally rest over the flowers. 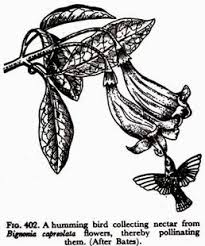 Some other pollinating birds are crow, bulbul, parrot and myna.  Ornithophilous flowers are brightly coloured and they produce large amount of nectar. The common bird-pollinated plants are Bombax, Erythrina, Callistemon, Bignonia etc.

Chiropterophily. Pollination by bats is known as chiropterophily.  Bats are nocturnal flying mammals which can transport pollen over long distances.  Chiropterophilous flowers are large-sized and have long pedicels.

Anemophily: Pollination by wind is known as anemophily.  Wind-pollinated or anemophilous flowers are small and inconspicuous.  The flowers are colourless, odourless, and nectarless.

In cereals (e.g., maize), the styles are feathery appearing as tufts of fine, long and silky threads.  Examples of anemophilous plants are coconut palm, date palm, Cannabis and many grasses. 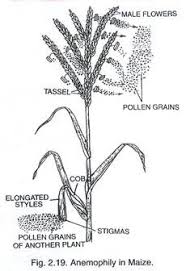 Hydrophily: Pollination by water is known as hydrophily.  The aquatic plants depend on water for the transfer of pollen grains.  It is common in plants belonging to the families, Potamogetonaceae, Ceratophyllaceae, Hydrocharitaceae etc.

The female flowers are brought to the surface of the water by the elongation of their stalk.  They have large sticky trifid stigmas.

While floating the anther of a male flower comes in contact with the stigma of a female flower.  The anther bursts and pollination is performed.  After pollination, the female flower is pulled inside water by the coiling of its stalk. 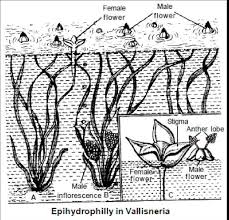