Photoperiodism is the response of the plants to the relative lengths and alternation of light and dark periods for initiation of their flowering.  The plant processes like flowering, fruit and seed production, bud and seed dormancy, leaf fall and germination are closely related to seasonal influences like day length and temperature.

Of these, flowering occurs at the same time year after year.  Some plants flower during spring, some during summer and others at the fall.  This mechanism that enables plants to respond to day length so that they flower at a specific time of the year is known as photoperiodism.

W.W. Garner and H.A. Allard (1920) were the first to describe the effect of day length on the flowering of plants.  They discovered that there was a critical factor affecting flowering.  It was also observed that plants would flower only if they were exposed to light for less or more than a certain period, the critical period, each day.

Subjecting long-day and short-day plants to light and darkness other than 24 hours, shows that flowering in plants is more of a response to the dark period than to light period.

On the basis of the photoperiod required for flowering, plants can be grouped into following three classes:

A short-day plant is one in which flowering is induced by exposure to shorter duration of day.  These plants would flower only when day length is shorter than a critical day length.  The critical day length differs with different species.  Typical short-day plants would not flower unless they are subjected to dark periods of about 11 to 14 hours.  For example, tobacco requires less than 13 to 14 hours of light period and more than 10 to 11 hours of dark period for flowering.

Flowering of the plants rather depends upon the length of the uninterrupted dark period than on the day light length.  Hence, these plants may rather be called as long-night plants.  Short-day plants include Bryophyllum, Chrysanthemum, Xanthium, Viola, Dahlia, rice etc.

A long-day plant is one in which flowering is induced by exposure to longer duration of day light.  These plants flower only when the day length is longer than a certain critical day length.  Long days of summer provide the long-day plants perfect photoperiods to permit flowering.  These plants require a relatively small dark period.  In fact, some plants flower best under continuous light.

It is therefore, appropriate to call them short-night plants rather than long-day plants.  Some examples of long day plants are barley, potato, sugarbeet, spinach, radish etc. 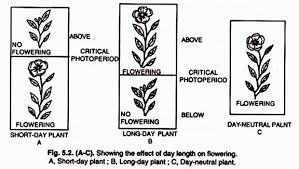 This indicates that some factor or factors for flower formation is produced and accumulated during the photoinductive cycle.  Such a factor provides stimulus for flowering, called photoperiodic stimulus.

The leaves are the organs which actually perceives photoperiodic stimulus and it produces a flowering stimulus in response to a photoinductive cycle.  Then, the stimulus is translocated to the apical bud.  There, it initiates flower primordia.

Experimentally, this can be demonstrated by exposing a single leaf of Xanthium, a short-day plant to a short photoperiod while the rest of the plant is subjected to a long photoperiod.  This results in the flowering of the plant.  Further, when a single photo-induced leaf of one plant is grafted to another plant with non-inductive cycle also promotes on the receptor plant.

A Photo induced twig of one species when grafted to another species, can induce flowering. Even a long day plant grafted to a short-day plant can also be induced to flower under short day condition.  This leads to the thought that flowering stimulus might be a flowering hormone.  M K Chailakhyan (1936) demonstrated the existence of such a flower-forming hormone and called it florigen.  It yet remains to be isolated.